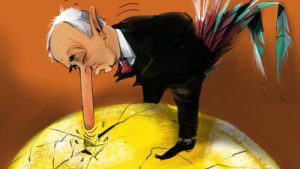 The story of how the Turnbull government stitched up the poorest policy by a Liberal government in decades is told in one short letter to The Australian from a former Treasury official and an explosive email sent to the Liberal Party campaign director by a party donor.

In a letter sent to this newspaper a week after the May 3 budget, Terence O’Brien wrote: “Assistant Treasurer Kelly O’Dwyer doesn’t seem to understand why the increased tax on superannuation will destroy trust in saving to fund one’s retirement.” He explained that past increases in superannuation taxation had been grandfathered, so that those who saved based on previous legislative incentives were not disadvantaged. O’Brien wrote that the May budget changes meant that someone putting money into super “can never again trust a government not to change the rules”.

O’Brien’s 40-year career has been spent working in federal Treasury, the Office of National Assessments, the Productivity Commission, the OECD and the World Bank. He is not a Liberal Party member. His letter formed the basis of a longer, even more compelling critique of the government’s superannuation changes. It will be published in the Centre for Independent Studies’ September issue of Policy magazine and O’Brien sent a truncated version via email to Scott Morrison on Sunday afternoon, ahead of Monday’s Liberal partyroom meeting.

O’Brien’s analysis is devastating. In it, he details where the Turnbull government went wrong with super, which is “the most enduring and inflexible commitment of savers’ lives”.

It is a 40-plus year commitment, writes O’Brien. “A 60-year-old can today expect to live past 90, so superannuation needs to finance a further 30 years of sustained retirement living standards, ideally in a predictable taxation environment. There might be 20 to 25 governments over that 70 years of a typical worker’s saving and retirement, so it is important that there be some sense of fundamental ‘rules of the game’ governing superannuation rule-making and taxation — a ‘superannuation charter’, if you will.”

O’Brien sets out how the 1975 Asprey taxation review set down principles to guide the “long-term (superannuation) commitments entered into by taxpayers on the basis of the existing taxation structure”. “It would be unfair to such persons if a significantly different taxation structure were to be introduced without adequate and reasonable transitional arrangements,” concluded the report.

Paul Keating’s changes to super laws in 1983 and 1988 were carefully grandfathered to maintain the integrity and trust involved in the long-term commitment by taxpayers to their superannuation. Protecting the integrity of super explains why the 1997-98 budget changes, raising the preservation age from 55 to 60 by 2025, were grandfathered. The same integrity principle meant super changes in 2009 to lower the limit on concessional contributions were grandfathered. It was the same reason changes in 2004 by the Howard government to the super scheme for members of parliament were carefully grandfathered, so as not to disadvantage those MPs who started saving via superannuation rules then applicable when they entered parliament before 2004.

Protecting the trust element of a working life commitment to savings via super explains why a Productivity Commission study last year found that “people significantly affected by major (superannuation) rule changes have generally been afforded grandfathering provisions that maintain their previous entitlements”.

Maintaining the sustainability and reliability of superannuation explains the meticulous policy process behind Peter Costello’s 2006-07 simplified super reforms. As O’Brien outlines, the process was well-researched and extensively detailed in an 80-page paper that attracted 1500 submissions over four months of consultation before the Howard government settled on the new super laws. The changes, which came into effect on July 1, 2007, were a model of carefully considered changes to laws that governed the retirement earnings and living standards of taxpayers who had saved for decades. By backdating its own super changes on budget night this year to that high watermark of careful policymaking on July 1, 2007, someone in the Turnbull government has a sick sense of humour.

More important, on May 3, the Prime Minister and Treasurer blew up the nation’s superannuation piggy bank, which for decades has been carefully con­structed on the basis of savers trusting the integrity of the system. The high price of the government’s breach of trust in rushing ahead with ill-conceived, dishonest and rushed superannuation changes is laid bare in a private email sent by Melbourne businessman John McMurrick to the Liberal Party campaign director Tony Nutt on May 16.

McMurrick is a long-time Liberal Party member. For 15 years he has donated to the party and raised funds through the Higgins 200 Club, a group responsible for funding the campaign efforts for the blue-ribbon seat of Higgins. McMurrick has helped raise millions of dollars, first for Costello, then for O’Dwyer.

In his email to Nutt, McMurrick details how his frustration and disappointment with the Liberal Party didn’t happen overnight. “Some years ago we arranged a fundraising dinner … in Toorak,” McMurrick wrote. “Tony Abbott was then the opposition leader and he was the guest of honour. I think that there were 10 guests at something like $10,000 per head. Tony spoke very well and when question time came he answered a couple of questions and then when the next question came Peta Credlin stood up and said, ‘I’ll take that question Tony.’

“The guests looked at each other in amazement. A few questions later and the same happened again. After the dinner had finished two of the guests approached me and said, ‘I have no intention of paying $10,000 to listen to Tony’s chief of staff answer questions. We paid to hear Tony.’

“I knew that we had a problem.”

McMurrick’s email details later episodes where party members were left speechless at the behaviour of Abbott and his chief of staff when McMurrick and the Higgins 200 Club tried to raise money for the party. When he tried to arrange for donors to meet Abbott in Canberra or Sydney, Abbott himself agreed, yet there was no reply from Abbott’s office. “We were blocked,” McMurrick told The Australian on Monday.

When Turnbull became Prime Minister, McMurrick continued his fundraising efforts and set in motion plans for a dinner that would raise $200,000 to $300,000. McMurrick never heard back from Turnbull’s office. A few days after the budget, McMurrick received one of the usual emails from Nutt asking for donations. The Turnbull government’s super changes were the last straw for this stalwart Liberal member, donor and fundraiser.

McMurrick reminded Nutt the Turnbull government had said they “were not going to touch superannuation”. Including this from Morrison on May 25 last year: “Taxing superannuation is a bad idea, I don’t support it.” And this from the Treasurer on February 18: “I fear that the approach of taxing in that retirement phase penalises Australians who have put money into superannuation under the current rules — under the deal that they thought was there. It may not be technical retrospectivity but it certainly feels that way. It is effective retrospectivity, the tax technicians and superannuation tax technicians may say differently.”

Indeed, Morrison, the Treasurer who said “we will not tax your super”, received a three-page email last Saturday from Melbourne QC and founder of the Save Our Super group Jack Hammond. “You made at least 12 ‘tax-free superannuation’ promises in May-June 2015 … We believe you should be reminded of your broken promises,” wrote Hammond.

The breach of trust also explains why McMurrick’s email to Nutt ends with his resignation from the Liberal Party. “Tony, because of the above I cannot continue to work and to raise funds for the Liberal Party. I have been a fierce supporter for some 40 years and a very active fundraiser for many years. Consequently, I have written to the Higgins 200 Club and resigned as a committee member and as a normal member, effective immediately, and I have also written to the Liberal Party, Victorian division and resigned as a member effective immediately … I cannot support a party that acts in, what I consider to be, such a dishonest manner.”

McMurrick isn’t the only party member to down tools over the government’s super fiasco, which is why Turnbull had to tip his own money into the campaign.

And before the Labor Party starts crowing about its credentials on maintaining the integrity of the super system, remember Chris Bowen supported the findings of the 2013 Cooper report that called for principles of certainty, the ability of people to plan for their retirement. Except that Labor decided on uncertain policy: pocketing the Coalition’s super savings without telling voters exactly what their policy was.

The question is not whether governments can change super laws. Neither is this a case of the rich calling for an end to the age of entitlement — except for them. During the past few decades, both Labor and Liberal governments have altered super rules carefully with the aim of maintaining the integrity of the system and the trust at the heart of lifetime savings commitments by taxpayers.

While McMurrick awaits a response from Nutt, the question is how the government responds to this episode, which marks the nadir of bad policy as a quick revenue grab. Tinkering won’t heal the wounds or return reliability to the super system.