Following is the transcript of the interview:

ANDREW PROBYN, REPORTER: A little over a week into maternity leave for her second child, Kelly O’Dwyer’s enemies have struck and they are not afraid to spell out what they want.

JACK HAMMOND QC, ‘SAVE OUR SUPER’ FOUNDER: Kelly O’Dwyer, in my view, doesn’t deserve to be our local member.

ANDREW PROBYN: One of Malcolm Turnbull’s five women Cabinet ministers, Ms O’Dwyer, is being targeted by a group of rich and powerful constituents, still furious at the use of the Government’s changes to superannuation. They say the timing of their intervention is incidental.

JACK HAMMOND QC: It’s a complete, if you pardon the pun, misconception. It has got nothing to do with her being on maternity leave or otherwise. They gave birth to an appalling policy which is affecting thousands of Australians and not only now but in the future.

They are the people who they should be thinking about.

ANDREW PROBYN: The Government argued that only the very rich were affected and with Labor support, the changes passed Parliament last November, including a 15 per cent tax on earnings for super nest eggs worth more than $1.6 million.

ANDREW PROBYN: One of those angered is Jack Hammond, a barrister who lives in Ms O’Dwyer’s leafy suburban seat of Higgins who quickly moved to set up the ‘Save our Super’ group. It held a rally during the election campaign that attracted a modest crowd but included some backers with deep pockets.

JACK HAMMOND QC: What may have been lacked in numbers, certainly made up in vehemence and anger.

JOHN MCMURRICK, FORMER LIBERAL MEMBER: No, it’s very unfair. It affects a lot of people. And they are crucifying not only those who made a bob, they’re crucifying hundreds of other people.

ANDREW PROBYN: John McMurrick, a former insurance broker, now property developer bristles at suggestions his opposition is out of self-interest.

JOHN MCMURRICK: We have got a campaign to try and help people who have planned for 30 and 40 and 50 years and their whole plans are thrown into complete confusion.

ANDREW PROBYN: Mr McMurrick a big party donor, quit as a Liberal Party member last year. But the push to unseat Ms O’Dwyer got new potency when Tony Abbott’s former Chief of Staff Peta Credlin, was mentioned in dispatches as a potential replacement.

JACK HAMMOND QC: She speaks very plainly. She is a very intelligent person and thus far she hasn’t broken any promises to this electorate and the Australian people.

ANDREW PROBYN: Ms Credlin, no ally of Ms O’Dwyer, was slow to dispel the story, saying at first she had not been formally approached to run in Higgins.

But by Sunday when the optics of moving on a Cabinet minister on maternity leave sunk in, she made it clear.

PETA CREDLIN, TONY ABBOTT’S FORMER CHIEF OF STAFF: Regardless of whether it is Kelly O’Dwyer or anyone else, I don’t think challenging sitting members is a good look. It certainly is not something that is rewarded in the Liberal Party.

ANDREW PROBYN: As the minister with responsibility for superannuation, Kelly O’Dwyer is feeling the heat for a collective Cabinet decision made almost a year ago, but the undermining of her just days after giving birth is very ordinary indeed.

And that’s only half of it. Ms O’Dwyer is at the pinch-point in an increasingly toxic Victorian Liberal Party division.

She’s caught up in a factional war, involving state party president Michael Kroger. It’s a split that could have implications beyond Victoria.

STEPHEN MAYNE, FORMER LIBERAL STAFFER: Michael Kroger is a very controversial figure. He is the President. There was a failed coup against him recently involving Peter Reith as an alternative candidate, which was backed by all of the old Peter Costello supporters like Kelly O’Dwyer and was also backed by the Victorian state Liberal Leader Matthew Guy. And obviously there is a state election in Victoria next year. So, it is the Kroger versus the rest forces at work.

MICHAEL KROGER, VICTORIAN LIBERAL PRESIDENT: I don’t comment on Liberal Party preselections. That is a matter for branch members. We had this trouble recently in the Victorian party, where various MP’s were commenting on the presidency. And that goes down extremely badly with branch members.

ANDREW PROBYN: Former Howard government member Peter Reith suffered a stroke in late March, forcing his withdrawal from his challenge for the presidency. Kroger loyalists say that their man would have won anyway. Perhaps by as many as 150 out of 1150 votes. The Reith camp says that’s rubbish and Stephen Maine, a former Liberal staffer, agrees.

STEPHEN MAYNE: Matthew Guy, coming out publicly and endorsing Peter Reith was the decisive factor in that contest and many believe that Reith would have won because Kroger was on the nose.

ANDREW PROBYN: Liberal insiders say there is a real prospect of tit for tat preselection challenges between the Conservative and moderate wings of the Liberal Party and not just in Victoria.

Tony Abbott is facing a possible challenge in Warringah and his staunch ally Kevin Andrews will likely face a fight for his safe seat of Menzies. Ironically was once touted as a seat fit for Peta Credlin.

STEPHEN MAYNE: It might be a case of leave Tony Abbott alone or we will proceed with this challenge against Kelly O’Dwyer and it might be that the Abbott forces are looking for a bit of peace based on “you wouldn’t want a war, would you?”

ANDREW PROBYN: Not that any of this would particularly perturb any of those who have their own personal beef with the Liberals.

JACK HAMMOND QC: It is not rich people intervening to protect themselves. It’s people who have relied on promises of government over decades, who have done nothing more than obey the law and then on budget night without any forewarning, you are suddenly sprung with a completely changed policy.

The way in which it is framed is, this will only affect a few wealthy people. How puerile, really. 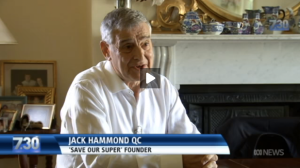