Last night we sent members a brief email with key points from the 2017-18 Budget. We’ve now delved deeper into the budget and have more detail on the measures relevant to SMSFs.

The first obvious point to make is that this year’s budget does not contain any nasty surprises for SMSFs. That’s a relief after last year’s shocker.

The budget contains an incentive for older Australians to downsize their homes, which may be attractive to some SMSF owners; but there’s less welcome news in the form of a new levy on bank deposits over $250,000 that may have a flow-on impact.

From 1 July 2018, individuals over 65 will be able to make a non-concessional contribution of up to $300,000 to their superannuation from the proceeds of the sale of their principal place of residence which they have owned for more than 10 years. Typically, a couple will be able to top up their super by $600,000.

The contribution can only be made to your untaxed pension account if you have a transfer balance of less than $1.6 million. If that’s the case, you can top up your unused cap space.

Otherwise, the contribution goes into your taxed accumulation account.

There’s no age limit (normally you can’t make contributions over 75) and no work test.

However, there’s very little information in the Budget about how the ‘downsizer’ incentive will work, including a definition of ‘downsizing’. We assume ‘downsizing’ will be a one-off option but this is not stated.

Some general information is in the Treasury Fact Sheet at the end of this newsletter.

The ‘downsizer’ option is an interesting move that may encourage some older people to sell their home and move to a smaller one though it may mean moving value from an untaxed asset (principal residence) to a taxed asset (accumulation account). There are also transaction costs (stamp duty and agent’s fees) to consider. It remains to be seen whether the incentive for downsizing will add to demand pressure on middle market housing as both downsizers and homebuyers compete for the same housing stock.

This measure probably won’t be relevant to most SMSF owners.

To help people save to put a deposit on a house, they will be able to contribute up to $15,000 a year and $30,000 as a concessional contribution to their superannuation fund.

However, these savings must be within the existing $25,000 per year concessional contributions cap.

This super earmarked for a house purchase can be withdrawn when members are ready to buy. Withdrawals will be taxed at marginal rates less 30%.

It will mean more administrative work for the major funds.

Perhaps the Government will now amend its objective of superannuation legislation to say the purpose of super is to “substitute and supplement the age pension…and help to buy a house”.

Levy on banks not good for SMSFs

Among a raft of measures aimed at the big banks, a levy on deposits that will raise $6.2 billion over four years is not particularly good news for SMSFs. This new cost to the banks will likely be met either through reduced profits and dividends or increased bank fees.

Speculation that banks would be hit drove down their share prices yesterday ahead of the Budget from which they did not recover today.

Typically, SMSFs are large holders of bank shares and some have sizeable deposits with the banks.

The new levy will apply not only to deposits but also to similar products such as corporate bonds, commercial paper and certificates of deposits.

Borrowings to be grossed up for cap limits

“From 1 July 2017, the Government will improve the integrity of the superannuation system by including the use of limited recourse borrowing arrangements (LRBA) in a member’s total superannuation balance and transfer balance cap.

Limited recourse borrowing arrangements can be used to circumvent contribution caps and effectively transfer growth in assets from the accumulation phase to the retirement phase that is not captured by the transfer balance cap. The outstanding balance of a LRBA will now be included in a member’s annual total superannuation balance and the repayment of the principal and interest of a LRBA from a member’s accumulation account will be a credit in the member’s transfer balance account.

This measure will ensure the 2016‑17 Superannuation Reform Package operates as intended and is estimated to have a gain to revenue of $4.0 million over the forward estimates period.”

It is not clear exactly what mischief this measure is intended to prevent but the revenue leakage is evidently not significant as the Government expects to raise only $4 million over the next four years. But it will complicate matters for some of the minority of self-managed funds that borrow to invest in assets to grow their retirement savings, typically small business owners who buy the property from which they run their business.

We recently expressed concern to Treasury about draft legislation giving effect to this measure because it means that gross rather than net (after interest) borrowings will be used in working out the $1.6 million balance caps. Practitioners tell us it may mean that some people relying on non-concessional contributions to help pay off their loan will not be able to do so if they exceed the $1.6 million caps when the gross value of their loan is counted.

Another integrity measure in the Budget that makes more obvious sense is to prevent dealings between related parties on a non-commercial basis. For example, if business owners are renting premises from their super fund, it must be on a commercial basis.

This measure to enforce the existing rules is expected to raise $10 million over four years.

For the Fact Sheet explaining generally how the ‘downsizer’ incentive will work, see below. 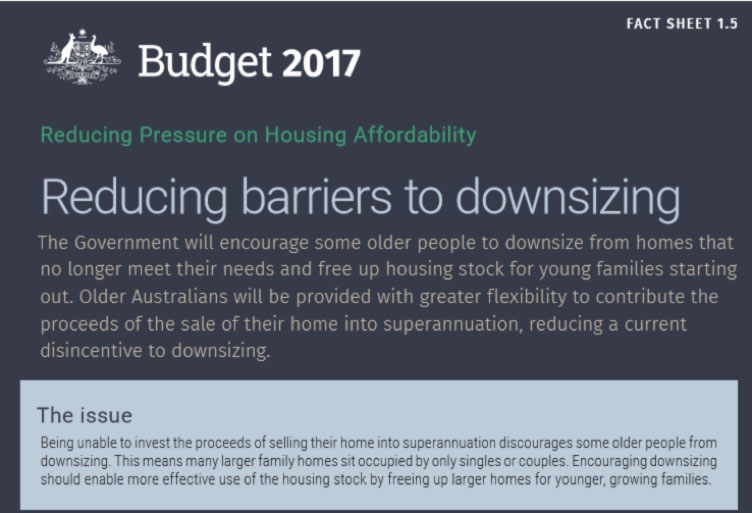 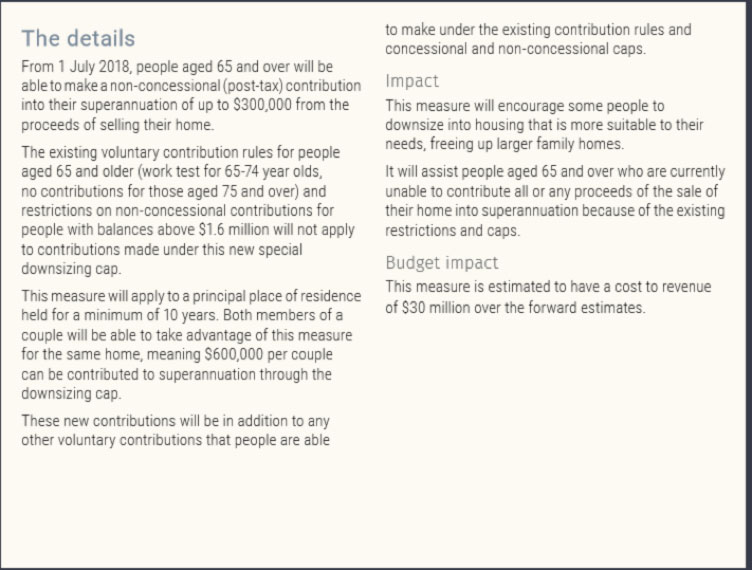 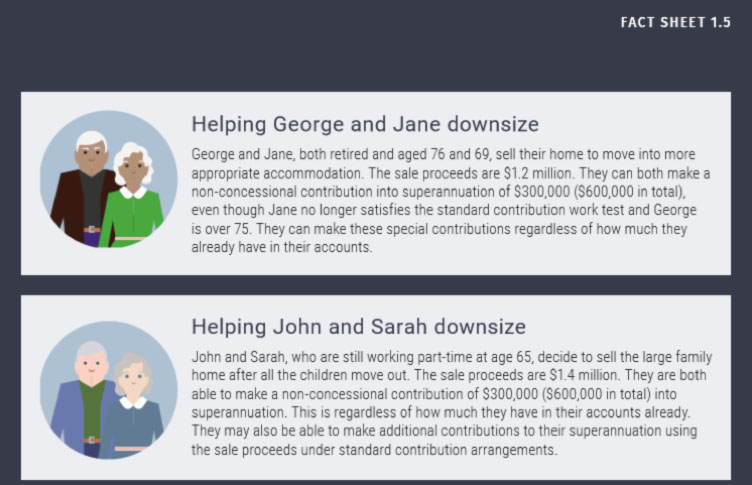 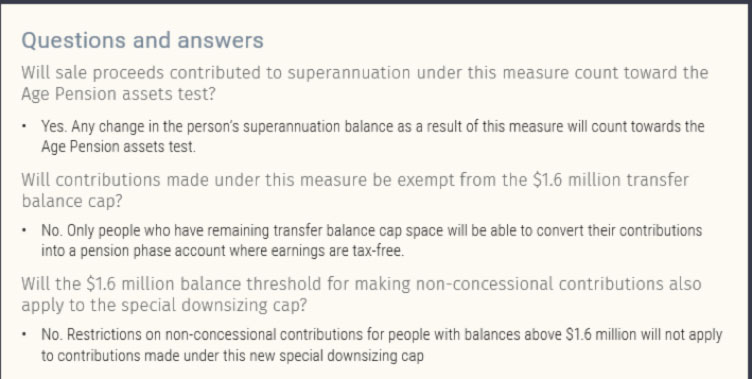