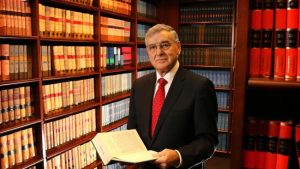 Mr Hammond will speak at a Melbourne meeting of lawyers and judges tonight and is expected to announce the formation of a group called Save Our Super which will call on the government to “grandfather” the impact of proposed superannuation changes on existing superannuation account holders.

The changes announced on budget night include imposition of a $1.6 million cap on the amount of money that can be moved into a tax-free super account, an immediate lifetime cap of $500,000 for post-tax contributions to superannuation, cutbacks in the attractiveness of transition to ­retirement schemes, higher taxes on super contributions for people earning more than $250,000 and higher taxes on payouts under ­defined benefit superannuation schemes above $100,000 a year.

In an interview with The Australian yesterday, Mr Hammond said the proposed changes were “manifestly unfair and unreasonable to individuals who now, or will, rely on their superannuation savings for retirement income”.

He said the government should not “make new rules which significantly affected” holders of existing super accounts “by penalising their actions taken in good faith, encouraged by the government, under then existing rules”.

Mr Hammond said changes to superannuation by either political party should have “appropriate grandfathering provisions to protect all affected Australians”.

However, grandfathering the budget changes would substantially reduce the expected $6 billion savings the government expects to reap over the next four years.

Mr Hammond, a barrister in Victoria for more than three decades, said he was in the process of retiring from his practice and would be “significantly affected” by several of the government’s proposed changes.

He said the proposed changes to superannuation rules would cause “millions of Australians who are effectively compelled by the Australian compulsory superannuation scheme to place their trust in the government” to lose faith in the system.

People who had not yet started superannuation needed to be “reassured that they can trust governments to always treat them fairly and reasonably” before they committed their savings to the ­system.

Mr Hammond’s new group is expected to call on all major political parties to grandfather their proposed super changes.

The NSW, Victorian and Australian bar associations said yesterday they did not have a policy on the Coalition’s proposed superannuation changes.