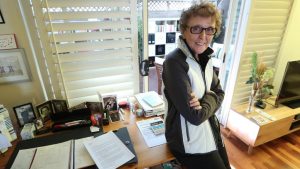 Psychologist Maureen Burke is one of thousands of Australians upset by changes to the superannuation system. Picture: Lyndon Mechielsen

Tax lawyers, accountants and fin­ancial planners have attacked the government’s changes to superannuation regulations, declaring it a “shemozzle” with widespread confusion about details affecting thousands of people.

Under changes that came into effect on July 1, a $1.6 million transfer cap has been imposed on the total amount of superannuation that can be put into a tax-free retirement phase account.

Any excess funds now need to be put into an accumulation phase fund — where earnings are taxed at 15 per cent — or withdrawn from the super system.

Despite being a key part of the government’s superannuation reforms, details about the balance transfer cap’s application were still being finalised in June, with industry experts voicing frustration about the uncertainty.

The Tax Institute, representing tax professionals, has warned that further sticking points are likely to emerge as a result of the rush to implement the reforms, which were first announced in last year’s federal budget. “Since May 2016, this has been a real debacle,” institute superannuation committee chairman Daniel Butler said.

“The industry is just up in arms about it. It’s proving to be an absolute disaster in practice.”

Industry bodies told The Australian that although Treasury and the Australian Taxation Office had worked diligently to confer about how the changes would apply, too much reform was implemented too fast.

While the balance transfer cap is the main issue, there is also some confusion around eligibility for one-off capital gains tax relief available for self-managed super funds to partially offset capital gains arising from complying with the $1.6m cap.

Financial Planning Association policy head Ben Marshan described the reforms as “a bit of a shemozzle” with elements of the transfer balance cap still being legislated in the month before it was due to take effect.

“Consumers need to take a good look at their superannuation and make sure it’s in order to make sure they’re not breaching any of these new laws,” he said.

Brisbane psychologist Maureen Burke had to set up a new superannuation accumulation fund because she hit the $1.6m cap after selling her family home and putting the proceeds into super.

Dr Burke, who had planned to retire at the time of the global fin­ancial crisis but kept working part-time to maintain financial security, said she was angry at the cost of seeking financial advice and maintaining another superannuation account.

“Superannuation was to help Australians work towards a self-funded retirement,” she said. “Now they are pulling the rug from under us and accusing us of being tax dodgers. It has eroded any trust and certainty in the system.”

A spokesman for Revenue and Financial Services Minister Kelly O’Dwyer said industry bodies had been regularly consulted since late last year and SMSFs had received some administrative concessions while they adapted to more onerous reporting requirements.