Public interest needs to be put first in superannuation reform

Superannuation: PC report signals super shake-up is on the way

Is your super fund any good? Is it suitable for you or did you just drift into it? Every single working person in Australia has super. It is quite simply a huge issue and this week the Productivity Commission produced a suitably huge report that could reshape super as we know it.

Better still, the report has managed to upset just about everybody in the industry, which is a good sign. It does not appear to favour anyone in particular.

There is one very big idea in the report — that everyone should have a single super fund for life. Whether this idea gets up or not, it at least drives home the point that if you have more than one super account you are working against your own retirement plan. Duplicate accounts erode your wealth and double your fees. One in three super accounts is still multiple.

The commission offers some powerful, and controversial, ideas that could have major ripple ­effects. For example, the “single fund for life” would be drawn from one of a top 10 list of funds chosen by an independent panel.

Moreover, all funds, including union-linked industry funds, would have to have a “critical mass” of independent directors.

It’s a blueprint for a substantially different, more efficient system that is — never forget — compulsory. The outstanding points are these:

But inside those headline numbers lurks a range of problems. 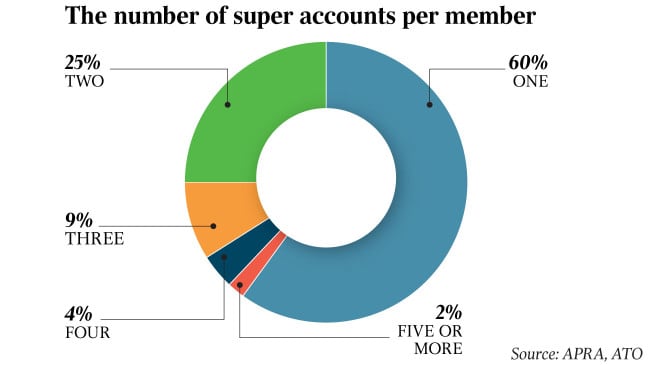 Sure, most people do well, but one in four funds are what the commission calls “persistent underperformers”. If you are in one of those 25 per cent of funds that are below average you are losing out big time. The report shows that over an average member’s working life, being stuck in a poor performing fund can leave you with 40 per cent less in retirement.

The report also shows that the miserable business of trailing commissions in super, which most people thought had finished years ago, is alive and well. When the government brought in the Future of Financial Advice reforms in 2013, they left existing trailing arrangements alone; that is, they were “grandfathered”. It turns out five years later there is still a staggering 663,000 accounts in the market paying more than $200 million on these commissions.

The sharp end of the report, led by PC deputy chair Karen Chester, is where it rubs up against the interests of industry funds. Leading funds such AustralianSuper, Cbus, HostPlus and REST currently stand as the clear winners in the system, topping the performance tables on a consistent basis.

Any fund that reckons it will be left outside the top 10 is going to resist this idea. But it may well come to pass. In a statement sure to turn heads across the sector, opposition treasury spokesman Chris Bowen said he would consider backing the top 10 idea.

For SMSF operators who represent only a fraction of total super holders but a big section of wealthy investors, there was mixed news. It argues that success among SMSFs is effectively restricted to those with more than $1m in their fund. The average SMSF fund has $1.2m so technically the sector should be pleased, but those averages are skewed higher by a small number of very rich funds. The median level of ­assets in an SMSF is much lower at $641,000 (according to most recent available figures, from 2016.

But this PC suggestion is debatable: SMSFs have major advantages that do not stand up to the commission procedures. They allow the member to choose their own investments and have their hand on the steering wheel in terms of asset allocation.

Importantly, SMSFs can also borrow for property or other assets. Significantly, the commission has no problem with geared super funds and says as much.

If the report has a weakness, it does not give sufficient air to the disrupters coming through the system that are not traditional players, such as the big four banks and insurers, and are not industry funds either.

Some of the new major online offerings from both traditional players, such as a low-fee specialist ING Direct, or robo-adviser operators such as Six Park or Stockspot, all offer very simple products that often depend on the new “indexed” products that have emerged, such as exchange traded funds. These funds are an alternative, as are the youth-focused funds appearing on the scene, but have been damaged by a serious of unfortunate events, particular at Spaceship Limited.