Sacre bleu! In recent weeks, while defending the government’s superannuation policy in the media, Scott Morrison has morphed from a future prime minister into a dogmatic zealot.

Meanwhile in Canberra an under-the-carpet consultation process has begun. Coalition MPs are being canvassed by the party hierarchy about the superannuation “reforms” in an attempt to gauge the level of support or resistance before the changes are put to the house.

Will MPs vote for the policy or cross the floor and vote against it? The only MP who said he would cross the floor, George Christensen, has been made a whip, so does that mean he has been bought off?

And if the superannuation policy does pass the lower house, will some sage operators in the Senate threaten to block the Australian Building and Construction Commission bill and force the government to change the policy anyway, and thus make a fool of the wimps who voted for it?

These are the important questions of our time.

Typically, among Liberal MPs courage seems to be in short supply. Apart from one exception, who floored me by asking, “Why should we tax people less just because they’re old?”, every MP I spoke with thinks the policy is appalling and must be immediately sunk — by someone else.

Meanwhile, looking on is the base: the Liberal rank and file, the members, the donors and the volunteers. Here is where fury and despair remain widespread. Policymakers needn’t panic, this is not about the desire to avoid tax. Everyone knows half the households in this country are addicted to their welfare — er, “transfer payments” — and someone has to pay for that.

Out there in the real world, among half of us at least, there is acceptance we are compelled to work to fund the necessities of life, such as family tax benefits to the middle class, corporate welfare, politicians’ entitlements, education industry rorts, childcare scams and the installation of squat toilets in the Australian Taxation Offices. The only fly in the ointment is that the Coalition’s superannuation policy is terrible. Labor’s superannuation policy is better.

I am told that before the election, cabinet waved the policy through simply because nobody understood it and time constraints were pressing. Indeed, the policy is complex, contradictory and bizarre.

There is a cap of $1.6 million, yet hardly anyone is allowed to get to that cap unless they inherit wealth or something like that. Most MPs don’t understand their own policy, let alone where it came from — a publicly funded left-wing think tank, the Grattan Institute. Its report Super Tax Targeting is sexist and ageist. It urges the government to take money off “rich old men” who don’t need it and are committing “intergenerational theft” anyway via their superannuation accounts. Further, self-funded retirees should be aware the authors of the report — John Daley, Brendan Coates and Danielle Wood — regard them as greedy pigs.

Look at the report’s cover, pictured below. 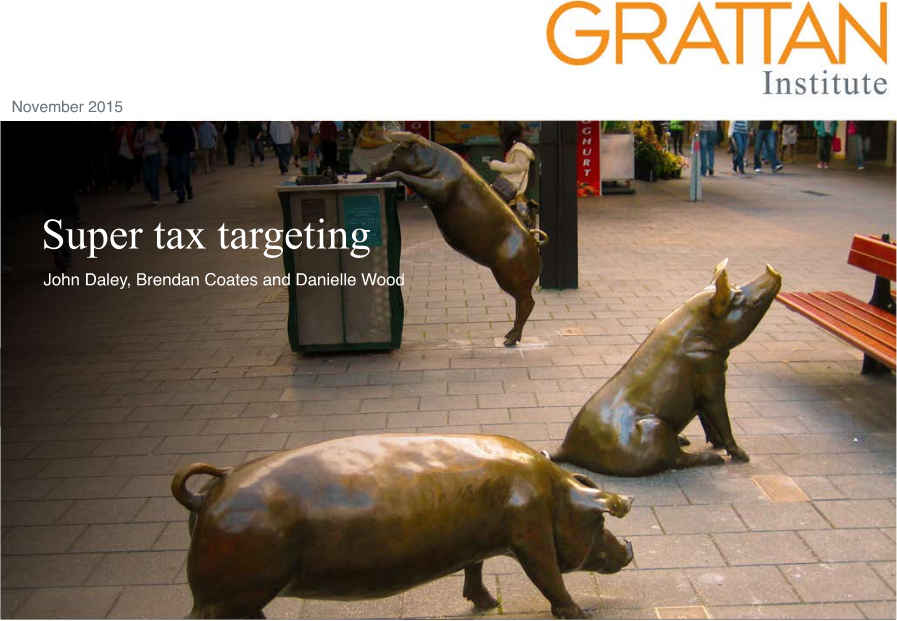 Sceptics who doubt the Liberals would be so foolish as to adopt the institute’s leftist agenda should seek out the report on Google and read just the first page.

Back in June, when a public furore broke out about the policy, the institute put out a media release by Daley and Coates. It was titled “Tax-free super is intergenerational theft” and said: “A number of politicians have struggled this week to explain the Turnbull government’s proposed changes to superannuation … this complexity explains why intergenerational ‘theft’ through superannuation has continued for so long. No one has ever explained why we should have an age-based tax system … some of these voters are now objecting vociferously to losing their privileges but they were never justified in the first place.”

I sent off emails asking the Coalition powers-that-be to deny their superannuation policy was based on or informed by the report, and whether they deny meeting the authors. The Treasurer and Revenue and Financial Services Minister Kelly O’Dwyer declined to offer a denial and sent back a statement saying they talked to everyone.

Greedy pigs on the cover of the Grattan Institute report

The Grattan Institute was formed in 2008 and $30 million of taxpayer funds has been given to it.

It is housed in taxpayer-funded accommodation at the University of Melbourne and is crammed to the rafters with ex-Labor staff. All of this, in itself, is not such a bad thing. What is life without diversity? We can’t all be productive members of society. But the problem is that a body such as this shouldn’t be setting Coalition policy.

How on earth did this happen? Who knows, but the PM and his wife are listed on the “Friends of Grattan” web page as individual financial supporters. Further, Lucy Turnbull has been on the board since December 2012. So in the absence of any other rational explanation for the Liberals’ superannuation madness, there is always that.