Disclaimer: The observations made in this newsletter are based on our reading of complex draft legislation and what we think it means. It will be some time before the draft legislation becomes law and there may be changes. SMSF Owners does not give investment advice.

Annual General Meeting
SMSF Owners’ Alliance Limited will hold its 2015-16 Annual General Meeting at:
4pm, Wednesday 16 November
Level 4 Boardroom
37 Bligh Street
Sydney NSW 2000
All members are invited to attend, however only Principal Members are entitled to vote.
After the formal meeting, there will be a general discussion about the future direction of SMSF Owners.
If you’d like to come along, please email info@smsfoa.org.au and let us know.

Our Chairman hammers the Government on superannuation changes
In his annual review, SMSF Owners’ Chairman, Bruce Foy, strongly criticises the Government for the complex and retrospective changes it is making to superannuation and the way it has gone about it with minimal consultation. Mr Foy says:
“What Morrison has done is to give himself and every following Treasurer a licence to claw back our retirement savings to make up for over-spending by government. We can be sure the current round of changes won’t be the last. The temptation for governments that can’t run a surplus budget, or at least a balanced one, will be to dip into the superannuation lolly jar again and again.”

And he questioned the Treasurer’s motivation:

“A disturbing aspect of Morrison’s changes is that they directly link superannuation to the state of the budget. At least he made no secret of his intention saying ‘above all else, this contributes to getting the budget back into balance’.

It strikes us as very poor economics to use savings to meet recurrent spending on welfare and other government programs rather than invest them to produce reliable income in retirement.

From when he became Treasurer, Morrison has often stated that superannuation is not for tax minimisation or estate planning. He has included this phrase in each tranche of the draft legislation. This is not appropriate in our view.

There is nothing wrong in maximising your savings by taking advantage of concessions to the extent allowed by the law. In fact this is precisely the intent of superannuation. It is wrong to imply that people who do so are tax dodgers.

Nor is there anything wrong in maximising your savings so you can have confidence that you will have enough to last through a comfortable and hopefully lengthy retirement. Where is the line to be drawn between prudent saving for an independent retirement and estate planning?”

You can read the full version of the Chairman’s Review here: https://www.smsfoa.org.au/media-release/news-updates.html

The Government is pressing ahead with its swag of new superannuation legislation in spite of widespread concern about its complexity and retrospective effect.

We expect legislation to be introduced to Parliament in the final sitting for the year starting 7 November and passed before the Parliament rises in December.

The Opposition has not yet stated its position on the legislation. It is waiting to see the Bills in their final form. However, even in the unlikely event that Labor opposes the legislation outright we expect the Government will be able to push the legislation through both the House of Representatives and the Senate with the support of the Greens, Xenophon and some independents.

With passage of the changes fairly certain, the challenge now for SMSF owners and their advisers is to understand how the new laws will work in practice and prepare for their introduction from 1 July 2017.
SMSF trustees will need to make careful decisions about the disposition of their superannuation assets before the end of this financial year.

All on the table now – we hope
The Government has now released three tranches of draft legislation, running to hundreds of pages of new tax law.

Tranche 1 dealt with the objective of superannuation – we argued the proposed purpose “to substitute for and supplement the age pension” was too limited and gave superannuation just a supporting role for the age pension rather than making it the central pillar of an effective and adequate retirement incomes system. We noted the limited objective lacked ambition and set no performance target for retirement savings

Tranche 2 dealt with the new $1.6 million transfer balance cap to apply from 1 July 2017 – we argued the cap was retrospective and, any case, too low. Independent research by Dr Ron Bewley showed the cap should be at least twice as high to provide an adequate income throughout retirement. We also proposed a 12-month period to bed down complex new legislation before penalties for exceeding the transfer balance cap apply.

For each tranche, the Government has allowed just a few working days for organisations like SMSF Owners to digest the changes and make submissions which, as a result, have been necessarily brief. Rushing changes to such a complex system as superannuation risks mistakes being made and unintended consequences.

Our submissions in response to each tranche can be found here:
https://www.smsfoa.org.au/joomla.html

Two balance caps
The main focus has been on the “transfer balance cap” which applies from 1 July 2017. On that date, you can have only $1.6 million in your tax-free retirement pension account. Any excess must be transferred to an accumulation account on which the earnings are taxed.
The draft legislation revealed that a second $1.6 million cap, called the “general transfer balance cap”, will also apply to all of your superannuation accounts (many people have multiple accounts – in a self-managed fund and in mainstream superannuation funds and perhaps defined benefit schemes as well). Once you have reached the general $1.6 million cap, you can make no further non-concessional contributions.

Two tax changes
Earnings on the assets held in an accumulation account in retirement phase will be subject to a new 15% tax. Prior to the legislation taking effect, earnings on superannuation funds in the pension phase have been tax free.

The second tax change kicks in if you transfer assets from your pension account to an accumulation account to meet the $1.6 million transfer balance cap. In the accumulation fund, those assets again become liable for capital gains tax. You will be liable to capital gains tax of 15% if the asset has been held for less than one year and 10% if held for more than a year.

Prior to the legislation, capital gains tax did not apply in the pension phase.
Sensibly, the Government will allow you to reset the cost base of the assets from 1 July 2017 but that expires after 10 years when the cost base of the assets will revert to their original value. For assets that have been held for many years, the capital gains are likely to be significant and even a 10% tax on them will be substantial.

Under the new arrangements, the annual non-concessional limit will be reduced to $100,000 and it can still be rolled forward for up to three years.

This table taken from the Explanatory Memorandum for tranche three summarises how it will work:

Heffron Super News has published a useful summary of the third tranche explaining the new non-concessional contribution rules which can be found here:
http://cdn.heffron.com.au/forms/132%20-%202016%2010%20-%20Changes%20to%20NCC.pdf

More complication
The $1.6 million transfer balance cap will be indexed in $100,000 increments based on the Consumer Price Index.

The Government explains:
“Proportional indexation is intended to hold constant the proportion of an individual’s used and unused cap space as their personal cap increases. This is worked out by finding the individual’s highest transfer balance, comparing it to their personal transfer balance cap on that day and expressing the unused cap as a percentage. Once a proportion of cap space is utilised, it is not subject to indexation, even if the individual subsequently removes capital from their retirement phase.” – second tranche Explanatory Memorandum.

The Government gives an example of how it will work for Amy:

However, things get a bit more complicated for Nina: 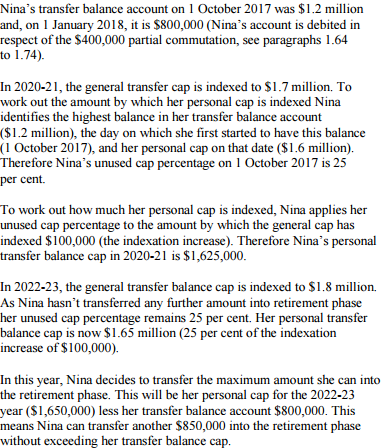 It would be simpler to just apply the new non-concessional rules from 1 July 2017 though at some cost to budget revenue.

All this complexity will add compliance costs for both self-managed funds and for the larger mainstream funds who will have to alter systems to cope with the new requirements. One superannuation expert has told us the increased annual cost of administration for a self-managed fund with more than $1.6 million could run to $3 – 4,000.