An Open Letter from Eugenia Mitrakas to Malcolm Turnbull 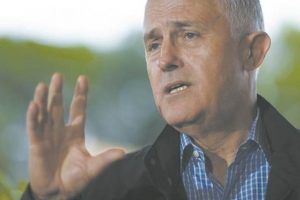 I am a Greek born solicitor in private practice in South Melbourne. I migrated to Australia as a young child with my family in the mid 1950s. I attended all the local primary schools. I have lived and practiced in the South Melbourne/Albert Park area for most of my life. I currently live in Albert Park. I have been in private practice (since 1972) running a small legal business for all my working life employing from time to time 2-5 persons.

I have worked extremely hard for more than four decades and I carefully planned for my retirement. I have, to date, used Superannuation as the main vehicle to fund my retirement. My family was brought up on a hard working ethic and having a government funded retirement benefits or pension in my family was looked upon as an indication of failure in your chosen profession and in small business.

I worked in the family businesses (running boarding houses and running the family fish and chips shops in my younger years during my student years and for a few years, as a young lawyer. I was brought up to believe that any hard work, no matter how menial was honourable and where hard work was considered an asset and, that one is always rewarded by their hard work. I continued to work in my parents’ fish and chips shop for the first few years of running my legal practice. My parents instilled in me a pride in hard work so long as it was honest work. This modest work moulded and helped in building my hard work ethic.

I have worried a lot in recent years about the fate of my county of birth, Greece and the desperate and sad financial position that Greece and the Greek people are faced with.

I have been a proud Australian and considered myself lucky to have had the opportunity to grow up in Australia and have an excellent education. I have indeed been very grateful for the many opportunities that Australia has given me, and in return, I have endeavoured to give back to the general community in Australia in order to repay my “debt” to Australia and to the community at large for giving me this great opportunity. At the same time, I have retained my Greek identity and pride in my Greek background, history and culture. I have an immense passion for the Glory of Classical Greece and its contribution to law health and justice of the modern day. I am a product of a multicultural Australia. I married an Australian who became a multicultural Greek. He read widely on modern and classical Greece and on the glory of Greece. He was the “Australian Skippy”. I brought up two Australian step children who are also proud of their Greek connections. This is a success story in Australia’s multicultural policies.

I do not have any sense of entitlement and have worked extremely hard to reach and achieve my goals. Australia is a country that rewards people who are prepared to work hard to achieve their goals, no matter how ambitious or modest.

I am currently on a transition to retirement. I have been very interested in the current debate about the changes to the policies about our superannuation.
I have, in the last few years, preached to my friends and relatives in Greece about their attitude and views to their retirement and to their sense of entitlement, which I believe has been a major contributing factor to the current financial crisis in Greece. I informed them of our policies and how our government planned to eliminate old age pensions and promote a community of self­ funded retirees.

I am, accordingly very disappointed with the proposed changes and the effect that these will have on hard working responsible Australians. I invested funds after tax into my self-managed super funds (SMSF) to fund my retirement and ensure that I was able to maintain my same lifestyle in retirement. I have worked in the family businesses since the age of nine and deserve to be able to enjoy my retirement. I came from a very humble background, encountered all the known and well documented prejudices but through hard work and determination, I was able to overcome them.

The proposals that were announced in the Budget Papers in May of 2016 are, in my view, very unfair to people who, like me, have worked hard to fund their own retirement.

In recent weeks, I have been forced to review my plans to retire and have taken active steps to continue working for an additional 5-10 years to enable me to fund my retirement goal.

The persons who will be caught by the new proposals are innocent hard working members of the community who have worked very hard to grow assets in super strictly within the confines of the law. They should not be penalised for saving in accordance with such laws. These people were actively encouraged by the government to plan and fund their retirement in order to reduce the welfare burden of the government in the future. They have done so with the encouragement and support of the law of past and present governments, both Labour and Liberal/National Parties.

If the government persists with their proposals to change the policies relating to our super, then there must be a grandfathering clause to ensure that persons who have worked hard to fund their retirement in accordance with the law, are not unjustly penalised.

I have followed closely the debate in the media about the new proposals of the Liberal National government. I have read the article which appeared in The Australian Newspaper on 8 June 2016 on page 7, outlining an interview with Mr Jack Hammond QC who has spoken against these proposals.

Opposition’s superannuation policies;
– reduction of the tax-free concession available to people with annual superannuation (pension) incomes from earnings of more than $75,000. From 1 July 2017, future earnings on assets supporting (pension) income streams will be tax-free up to $75,000 a year for each individual. Earnings above the $75,000 threshold will be taxed at 15 per cent. Note: under the proposal, capital gains are to be grandfathered;
– similar concessions reduced for defined benefit superannuation schemes by removal of the 10 per cent tax offset for defined benefit income above $75,000; which will protect all Australians against any legislation which changes the rules of the game for existing superannuation savings and actions taken in reliance on those rules and savings, by including appropriate grandfather clauses.

I am fully cognisant that the government has to “balance the budget” in order to reduce our ever growing debt, but we should not punish innocent persons along the way.

Penalising hard working and responsible members of our community is an unfair way of trying to ‘balance our books’ and encourages people to live on welfare. These persons who have accumulated assets in super are also running a small business and employ a small number of employees. This policy, if implemented, will have a detrimental effect on small business.

I have sent a copy of this letter to the press for publication.

Please let me have your response on or before 27 June 2016 to assist me and my family in making our decision on how to vote at the General Election on 2 July 2016.