Labor ran rings around the Libs in 2016 election, and it showed

Older Australians are deserting Malcolm Turnbull’s government in a powerful swing that is fuelling the rise of Pauline Hanson’s One Nation, with the federal Coalition suffering a 10 per cent fall in support among voters older than 50 since the last election.

The government is also under threat from a backlash in Queensland and Western Australia, where voters are recording the strongest shifts in a nationwide trend that has the Coalition trailing Labor by 47 per cent to 53 per cent in two-party terms.

Bill Shorten is failing to capitalise on all of the Prime Minister’s woes, with Labor gaining just a fraction of the national swing against the Coalition in first-preference votes and making no headway in NSW and South Australia.

An analysis of 6943 voters in Newspoll surveys taken between February and April reveals a deepening frustration with both major party leaders, with Mr Turnbull’s net satisfaction rating declining by five percentage points since August while the Opposition Leader’s fell by nine.

The discontent has helped lift Senator Hanson’s party to 10 per cent support in primary vote terms as a result of increases across every age group, although its strongest gains were among voters older than 50. 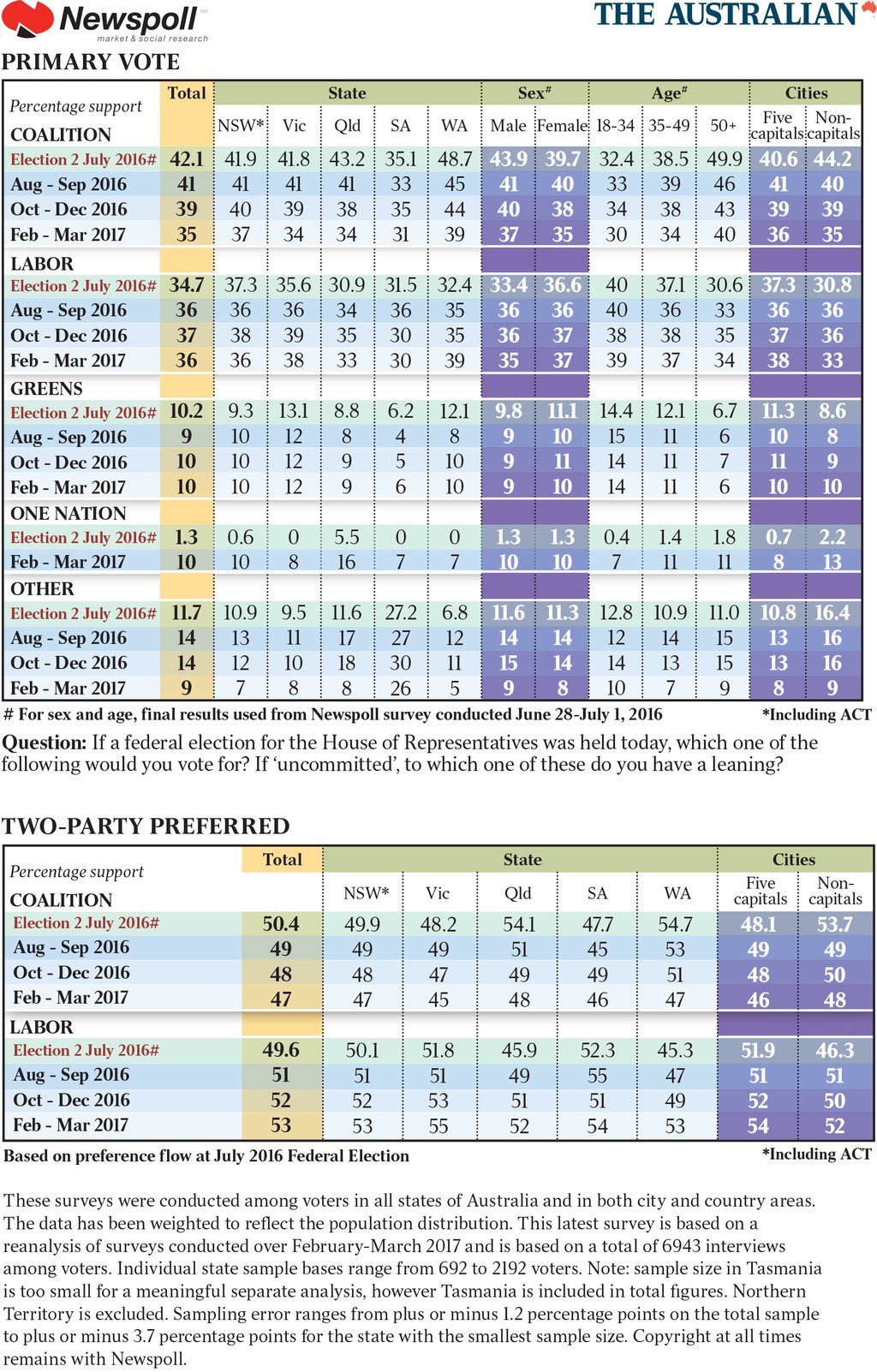 The quarterly analysis, conducted exclusively for The Australian, highlights the shift in the electorate since the July 2 election and the crucial role One Nation prefer­ences could play when Australians next go to the polls.

One Nation support has surged in Queensland from 5.5 per cent at the last election to 16 per cent this year, despite a furore over Senator Hanson’s factual errors on vaccination, calls for an investigation into the party’s finances and complaints from a former candidate that the party was “just another grubby, dirty, bloody political party” out to serve its own ends.

Mr Turnbull has vowed to focus on the “sensible centre” of Australian politics in a warning to colleagues against a “reactionary” message to voters, telling a Liberal Party conference last weekend that the future lay in bringing ­people together.

With Mr Shorten appealing to “working and middle-class families” by pledging to defend penalty rates and attacking the Coalition’s business tax cuts, the quarterly Newspoll analysis shows voters in WA have shifted strongly to Labor but the gains have been more modest in other states.

Australians older than 50 make up the single largest voting demographic and have emerged as a big problem for the Coalition over the past two years, given they have been hit by increases in super­annuation taxes, cuts to pension supplements and tighter rules on the Age Pension assets test.

The Coalition enjoyed almost 50 per cent primary vote support among the 50-plus age group last July but this is now 40 per cent, deepening a trend revealed in The Weekend Australian in December.

While the Coalition’s support among older voters has slipped in the past — including a fall from 51.8 per cent at the 2013 election to 45 per cent in the months before Tony Abbott was replaced as prime minister — the slump in recent months is an alarming low for Mr Turnbull.

In a sign Mr Shorten has struggled to capitalise on all of this shift, Labor’s primary support among voters in the 50-plus group has climbed from 30.6 to 34 per cent since the election and not changed among the other age groups. 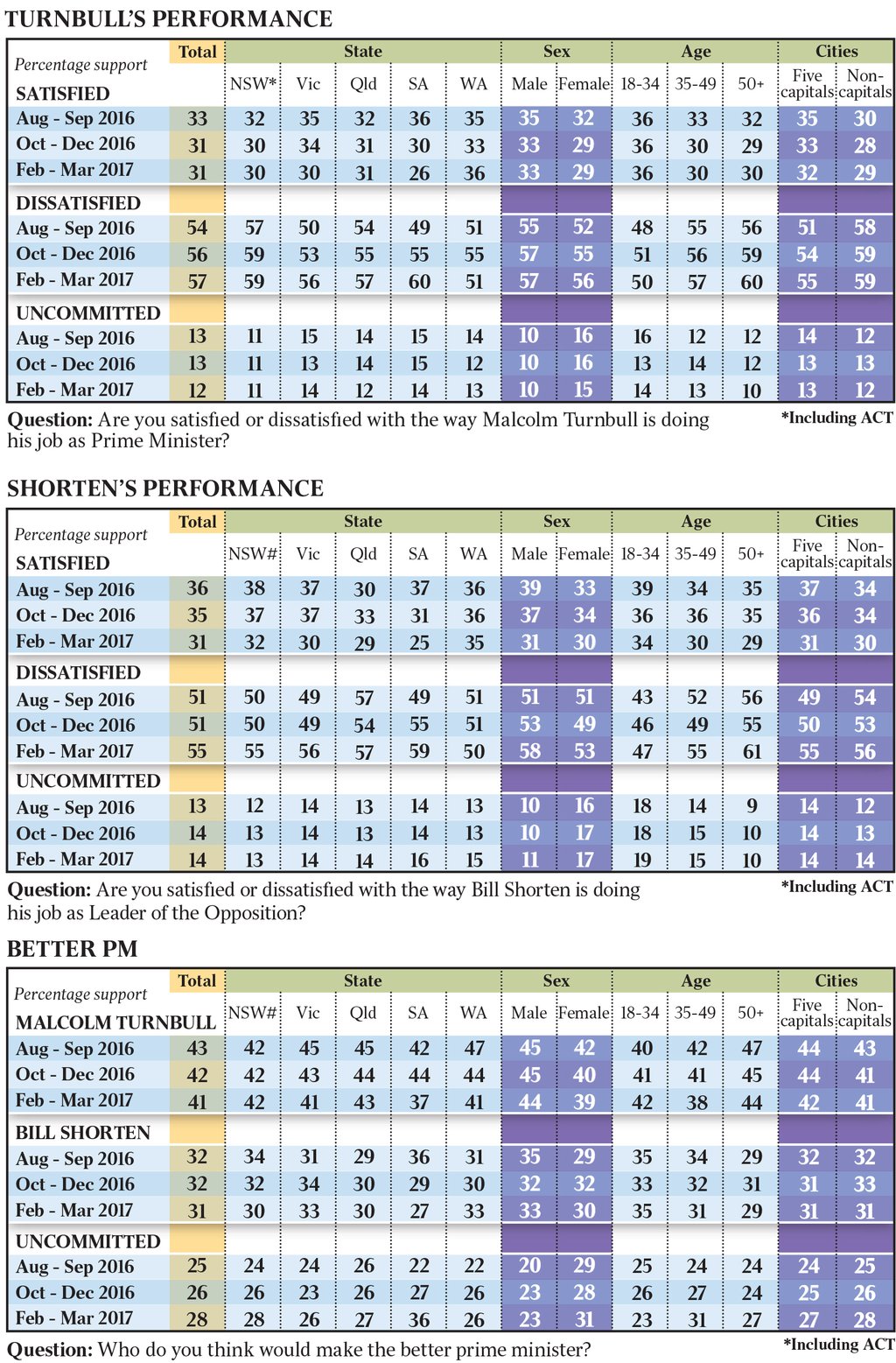 The Newspoll analysis, which has a margin of error of only 1.2 per cent on national figures, confirms that 29 per cent of voters are not giving their primary votes to either of the major parties — up from 23 per cent at the election.

Immigration Minister Peter Dutton yesterday said the government could win the next election and “win it well”, despite making comments last week linking Mr Turnbull’s hold on the prime ministership with the Coalition’s poor Newspoll results.

Mr Turnbull cited the ­Coalition’s loss in 30 consecutive Newspolls when he rolled Tony Abbott for the leadership in 2015.

“I think Bill Shorten, as each day goes by, people’s doubts about him grow,” Mr Dutton said.

He said that when he was preselected in January 2001, John Howard was “gone for all money”.

“With two years to go, we have the ability to turn the polls around, to win the election well under Malcolm Turnbull,” he said.

“On policy fronts including nat­ional security and border sec­urity, as well as economic security and energy security, this government can win the next election, and win it well.”

The Greens have held their primary vote at 10 per cent while One Nation has more than doubled its support to 10 per cent since late last year, with another 9 per cent of voters backing others.

With voters marking down the government after its narrow victory at the election, the Coalition’s primary vote has fallen from 41 per cent to 35 per cent since a similar Newspoll analysis from August to September last year. While One Nation’s support has climbed sharply, Labor’s primary vote has not changed.

As a potent force in Australian politics with four senators, One Nation has broken out in Newspoll results since November. Its support has climbed to 7 per cent in Western Australia and South Australia, 8 per cent in Victoria, 10 per cent in NSW and 16 per cent in Queensland.

Support for the Greens ranges from 12 per cent in Victoria to 6 per cent in South Australia, where the party struggles to match the ­appeal of the Nick Xenophon Team. Senator Xenophon’s party has maintained its strong support in the state, despite his ongoing role as a key powerbroker in the Senate.

Men have turned against the Coalition slightly more strongly than women, but today’s analysis highlights challenges to both leaders and their parties.

The Prime Minister’s net satisfaction rating — the difference between those who are satisfied and those who are dissatisfied with his performance — has weakened slightly from -21 points to -26 points over the period from August to April.