Many [SMSF] strategies are based on the proportioning rule

The idea behind it is simple: Australia needs a way to ensure retirees do not outlive their savings. The solution sounds simple too: Create a suite of products that can provide a minimal additional level of income or a guaranteed level of income, with the expectation that it will stay constant (in real terms) for life.

But the path to creating the federal government’s Comprehensive Income Products for Retirement regime (also known as MyRetirement) is proving anything but smooth. Many believe what the government has come up with is at best unworkable and ineffective, and at worst unnecessary .

The peak body for the superannuation industry, the Association of Superannuation Funds of Australia, says in its 27-page submission to the inquiry into CIPRs that the framework “as currently designed … is neither necessary nor sufficient to achieve its stated objectives”.

KMPG’s superannuation director Katrina Bacon is blunt. She doesn’t believe many retirees will embrace the annuity-style products the regime envisages. 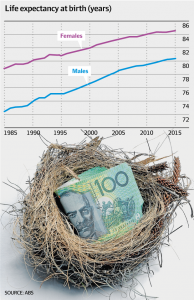 “I believe the launch of retirement products will continue to be a slow burn. From the individual’s point
of view, the framework does little to address the impediments to members taking them up,” she says.

Private pension
With the majority of super funds’ memberships soon to stop working, a so-called private pension product could well become their most important product offering.

This move towards the CIPRS framework stems from people’s uncertainty over how to make their retirement funds last across an impossible-to -predict lifespan.

Statistics show that 50 per cent of males currently aged 65 will die before 85, while 50 per cent will live longer and many will hit the ripe old age of 100.

“Because of the uncertainty, many retirees scrimp and save, and live on the minimum drawdown from their superannuation assets, driven by the fear of running out. As a consequence their lifestyle in retirement is curtailed and bequests are high,” Bacon says.

Those who are well-off can draw down the minimum amount from their super pension, keeping it in a tax-free environment.

“But for the population in between – who have a reasonable amount of super savings that can usefully supplement the age-pension and non-super assets – the challenge is how to spread this amount over retirement,” she says.

Super funds began thinking about the particular issues faced by retirees as far back as 2009, with ING becoming the first to market with a product that provided a guaranteed income for life. But these products have received a mixed reaction because of their cost and the challenge of explaining them.

Default offering
“The importance of this issue has increased as the number of retirees has grown. The concept of a MySuper-style default offering in retirement was contemplated as part of the Stronger Super reforms but was not implemented,” says Bacon.

“It was raised again as a recommendation of the 2014 Financial System Inquiry, eventually leading to the government’s release of the CIPRs framework for industry consultation.”

Treasury manager, retirement income policy division, Darren Kennedy told a Financial Services Council forum in May that the CIPRs framework aims to balance flexibility and risk by combining products like an annuity and an account-based pension.

Kennedy says the CIPRs framework is not intended to compel retirees to take up a certain retirement income product, to encourage annuities, to eliminate bequests for super or replace the need for financial advice.