Brexit means the Government must pause and re-think on superannuation

Election 2016: Chill winds blow for Kelly O’Dwyer in the once-safe seat of Higgins

Click here for the original article in the Sydney Morning Herald on June 25 2016
Election 2016: Chill winds blow for Kelly O’Dwyer in the once-safe seat of Higgins 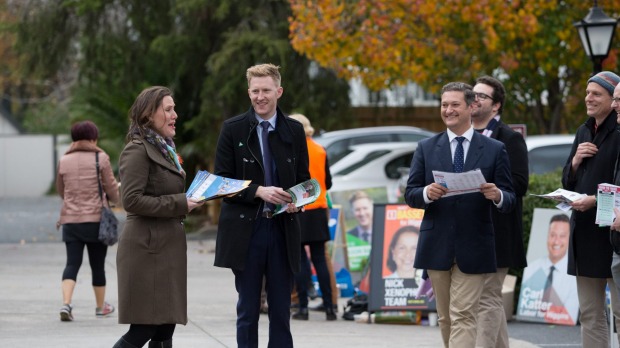 A keen breeze slices down Glenferrie Road and skirls around the cold bluestone of St George’s Anglican Church in Malvern.

Colour-coded knots of earnestly smiling greeters huddle on the church centre’s driveway, stamping their feet, grasping sheafs of how-to-vote flyers in gloved hands and looking sideways at each other.

The T-shirts of an enthusiastic little army supporting the Greens’ candidate, Jason Ball, dominate the entrance to the church grounds.
Advertisement

Further up the path is a corp in red: Labor Party believers seeking votes for the ALP’s candidate, Carl Katter.

Here and there are volunteers in the orange of Nick Xenophon party’s offering the cards of candidate Nancy Basset.

Blue seems everywhere, but is concentrated around a coated and booted figure so familiar around here that she does not need to wear her party’s colour. It’s Kelly O’Dwyer, Liberal member for Higgins, federal Minister for Small Business and Assistant Treasurer.

Here is the pre-poll centre for Higgins and several other electorates in Melbourne’s inner south-east.

In a federal election judged by most commentators to have failed to engage the public, the pre-poll centre at the St George’s Church hall is busier than anyone can remember.

There is something close to a sense of urgency, as if it were not the blue-ribbon Liberal seat that it has always been since it was established in 1949, but a marginal, out on the edge.

Cars nose in and out of the drive, dodging the massed spruikers, and a steady stream of pedestrians files in, despite the chill.

The political candidates and their volunteer teams radiate welcome to those planning to vote, but there is a discernible iciness between the camps.

Labor’s Carl Katter – estranged half-brother of the maverick north Queensland independent Bob Katter – says he was overwhelmed with happiness and pride at the start of the campaign when he discovered there would be two openly gay candidates in this one seat: him and the Greens’ Jason Ball, who in 2012 became the first Australian rules footballer to come out as homosexual.

Katter says he and his half-brother don’t talk any more because of Bob Katter’s homophobic attitudes, and Higgins, about as far as he could be from his Mount Isa childhood, has become his comfort zone.

“On my research only 5 per cent of this electorate identifies as LGBTI, but here were two of us standing in Higgins – I thought how wonderful.”

But Katter’s mood darkens when he speaks of the Greens publicising a poll that purported to show that Jason Ball would gain more votes than him. Labor’s candidate at the last election gained 24.1 per cent of the Higgins vote, while the Greens got only 16.8 per cent.
Carl Katter, Labor candidate and estranged half-brother of Bob Katter.

“To be fair, that poll the Greens put out … well, it was just too much,” says Katter. He professes to know more than most about campaigning. He says that when he and Bob were children, their father Bob Katter snr – a Country Party MP for 23 years – would put the two boys in the back of his ute with a big sound system and park outside the roughest pub in Mount Isa.

“We’d have to dodge all the beer cans being thrown at us,” he says.

Now, he claims, he has suffered something worse in Higgins: homophobic attacks from people he claims are Greens supporters. He will offer no detail, saying he doesn’t want to give the matter oxygen.

About the only cause that now appears shared between Katter and Ball is opposition to a plebiscite on gay marriage. They both insist it should be settled by Parliament.

The poll Katter is referring to was undertaken for the Greens by Lonergan Research.

Its published findings throw assumed wisdom about Higgins on its ear.

Most glaringly, it found Kelly O’Dwyer’s primary vote collapsing by 10 points since the last election – down to 44.1 per cent from 54.37 per cent.

Should this prove to be accurate – and the Liberal camp doesn’t accept it – O’Dwyer would be the first Liberal member for Higgins forced to preferences.

The poll also found that Ball would get almost one-quarter of the Higgins’ first-preference vote – well ahead of Labor – and on stated preference flows, the Greens would receive 47 per cent to O’Dwyer’s 53 per cent.

Unsurprisingly, Ball and his supporters have taken much heart from the figures, claiming they have time to build on them.
Jason Ball poses for a selfie while campaigning for Higgins.

Jason Ball poses for a selfie while campaigning for Higgins. Photo: Eddie Jim

Ball and his young tech-savvy team have been busily outplaying all the other candidates on social media – Ball’s Facebook site has almost 23,000 followers, compared with O’Dwyer’s 9000 and Katter’s 1900 – and he has taken direct mailing campaigning to the cutting edge, too.

He has been sending letters addressed to the younger members of each Higgins household in the hope they might influence their parents and grandparents to vote Green – something Ball says he has anecdotal evidence is happening.

His letter cheekily declares that “unlike most seats, which are a choice between Labor and Liberal, here in Higgins, the contest is between the Greens and the Liberals”.

He ends it by offering his email address and his personal mobile phone number (something most politicians keep confidential), saying “it would be my pleasure to have a chat”. He spends much of his time with the phone glued to his ear.

Ball claims O’Dwyer has been dodging the media and public meetings since the poll came out and attracted the interest of The Age, which pondered in print the unthinkable: could O’Dwyer become the new Sophie Mirabella, who sensationally lost her safe seat of Indi to independent Cathy McGowan at the last election?

In fact, O’Dwyer does not appear to be dodging anyone on the day The Age visits the pre-poll centre.

“I’m out and about doing what I’m normally doing,” she says cheerily, grasping the hands of well-wishers, chatting and handing out her Liberal how-to-vote cards.

She is assisted by her sister Kate and her mother Karen in a sort of echo of what is happening at the other end of the pathway, where Jason Ball’s mother Helen and his sister Melissa are working the voters, too.

O’Dwyer is, however, not simply battling the Greens and Labor and several smaller parties.

Her biggest danger could be from friendly fire: Liberals infuriated by proposed changes to superannuation.

On Monday a new organisation called Save Our Super established by Melbourne QC Jack Hammond held a rally at the Malvern Town Hall, just down the street from the pre-polling centre.

The meeting, calling on the government to “grandfather” the impact of proposed changes on existing superannuation accounts, was attended by more than 200 people, many of them from O’Dwyer’s natural constituency: well-heeled Liberals looking at retirement or already in it.

O’Dwyer was invited to attend, but did not. Hammond left a seat vacant to underline her absence. Paraphrasing Menzies’ “forgotten people”, Hammond – who once advised prime minister Malcolm Fraser, declared self-funded retirees were now “the disposable people”.

The mood among attendees, he says, was “white-hot rage”. As for O’Dwyer – she’d stopped taking his telephone calls.

O’Dwyer avoids the matter of superannuation when The Age inquires.

“Oh, there’s a lot of talk about superannuation, but most people are concerned about the economy,” she says, and hastens to build on the government’s wider economic narrative.

Australians had become accustomed to 25 years of uninterrupted economic growth, but were concerned that conditions were growing difficult.

They wanted to be reassured that their children and grandchildren would have the opportunities they had, but that could only be achieved through a growing economy, which only the Coalition could offer.

GetUp, an organisation professing to be an independent movement to build a progressive Australia, is distributing material urging voters in Higgins to put her last on their ballot papers.

And the Animal Justice Party, which is fielding in Higgins a psychologist and academic Eleonora Gullone, “boasted that they got the Greens elected in [the state seat] of Prahran”, O’Dwyer’s sister chips in.

As Australia heads to its first winter federal election since Bob Hawke took the nation to the polls in July 1984, the air seems likely to become even frostier in Higgins, where it once seemed so easy for Liberal candidates.