Peter Costello slams complex tax system, says MPs should do their own returns

Why Labor has got its sums wrong on franking credits

An open letter to Kelly O’Dwyer, MP – the Member for Hypocrisy

It is with sorrow rather than anger that John McMurrick and I write this open letter to you.

On 4 April 2018 you circulated to “higginsliberals” an email regarding superannuation. It was headed “The choice could not be clearer”.

That email included a link to a speech about superannuation, which you said you gave on that day to the Australian Financial Review’s Banking and Wealth Summit (see attached copy [at bottom of this page]; addressee redacted).

When John and I read your email we were gobsmacked! What you now say sits in marked contrast to your past acts.

Your email and our response

Your email begins: “Fundamentally, the Liberal Party stands for those Australians who work hard to build a better future for themselves and their families. Our superannuation system must reward those who save for their future….”.

Later you say: “ [In my speech] I spoke about the Turnbull Government’s plans to make sure our superannuation system… delivers certainty and stability so Australians can plan for their retirement in confidence”.

However, as you are well aware, in May 2016, by the Turnbull/Morrison Budget, many Australians who had worked hard to build a better future for themselves and their families and who had saved in accordance with successive governments’ superannuation rules (including those made by Coalition governments) were not to be rewarded but were to be punished by the Liberal Party.

You were instrumental in effecting those changes to the superannuation system.

Those changes delivered uncertainty and instability.

Australians can no longer plan for their retirement in confidence.

You have turned superannuation from a long-term, multi-decades, retirement income system into, at best, an annual Federal Budget-to-Budget saving proposition.

In February 2016, Scott Morrison rightly cautioned against what he called the ‘effective retrospectivity’ of raising taxes or restrictions on the pension phase of superannuation after attracting and trapping savings in superannuation for some 40 years under the earlier legislated tax rules.

Both of you failed to include in the Turnbull/Morrison Budget 2016 appropriate ‘grandfathering’ provisions which have accompanied every major adverse change in pensions and superannuation tax for the last 40 years.

Scott Morrison and you, with the support of the Coalition, destroyed many Australians’ confidence and trust in the superannuation system.

But that’s not all.

By what follows, Scott Morrison and you gratuitously insulted every Australian that had faithfully conformed with the previous superannuation rules and had, in the process, lawfully saved a substantial amount for their retirement.

On 9 November 2016, to give effect to those superannuation changes, Scott Morrison presented the Coalition’s superannuation package to Parliament. The changes wrought by that package came into practical operation on 1 July 2017.

To publicly explain and justify those superannuation changes to Parliament, Scott Morrison and you circulated and relied in Parliament upon a 364 page “Explanatory Memorandum”.

The Explanatory Memorandum states on its cover page “Circulated by the authority of the Treasurer, the Hon Scott Morrison MP and Minister for Revenue and Financial Services, the Hon Kelly O’Dwyer MP”.

In turn, the Explanatory Memorandum expressly refers to, and provides links to, a Grattan Institute media release and report (see attached extract [at bottom of this page]).

That Grattan Institute material shows, on its cover, an image of three of the bronze pigs on display in the Rundle Street Mall, Adelaide [1]. 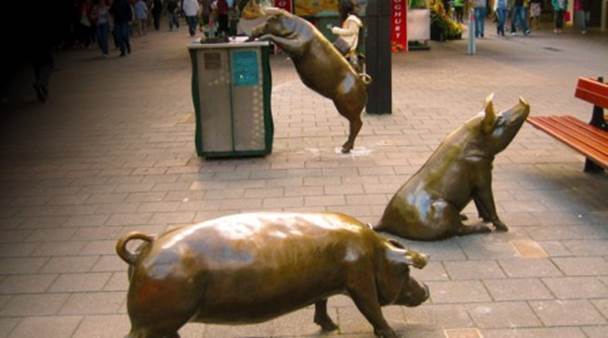 We, and other self-funded superannuants, believe that The Grattan Institute’s prominent use of that image of those bronze pigs was not merely a juvenile attempt at humour.

It was a none-to-subtle insulting implication that Australians that had faithfully conformed with successive governments’ superannuation rules and had substantial superannuation savings were, nonetheless,  greedy pigs with their ‘snouts in the trough’.

Yet there it is in Scott Morrison’s and your Explanatory Memorandum to Parliament which you used to justify and explain your superannuation changes.

In your email you say: “In contrast, Labor plans to make changes that will make it harder for people to be self-reliant in their retirement,….”(emphasis in original).

In our opinion, it is Scott Morrison and you, supported by the Coalition who have made it harder for people to be self-reliant in their retirement, principally by the adverse superannuation changes announced in the Turnbull/Morrison Budget 2016 and its subsequent legislation.

Labor gratefully supported that legislation in which you failed to include appropriate ‘grandfathering’ provisions.

Labor could not believe its luck!

True it is, that Labor plans to make it even harder, than the Coalition has, for people to be self-reliant in their retirement. But surely it is hypocritical to draw attention to Labor’s proposed adverse superannuation changes whilst studiously ignoring those in which you played a major part.

The choice could not be clearer

Finally, the heading of your email, namely “The choice could not be clearer”, may well prove to be true.  But, because of your past actions and that of Scott Morrison and the Coalition, not in a way that you and many of the recipient “higginsliberals” would prefer to see happen.

Attachments to the open letter:
The choice could not be clearer

Footnote to the open letter:
[1] The Explanatory Memorandum refers to The Grattan Institute’s 24 November 2015 report, “Super tax targeting” by John Daley and Brendan Coates: see page 275, paragraph 14.12, footnote 2.
Click on the link on footnote 2, “2 Grattan Institute, media release, ‘For fairness and a stronger Budget, it is time to target super tax breaks’, 24 November 2015,  http://grattan.edu.au/for-fairness-and-a-stronger-budget-it-is-time-to-target-super-tax-breaks/.”
Click on the link at foot of that page “Read the report“.
That link will take you to The Grattan Institute report “Super tax targeting “ dated 24 November 2015 by John Daley and Brendan Coates.
The report’s cover page shows the image of those bronze pigs in the Rundle Street Mall, Adelaide.
Note: The Grattan Institute’s website has been updated since the publication of that document. However, the article itself and the image of the 3 pigs remain.